This article presents my setup on how to use Visual Studio with Rust. It’s not a perfect setup, but it is good enough for me.

There exists a Visual Studio extension for Rust. I have it installed, but mostly using it to get syntax highlighting, it’s not essential to use it.

To use Rust with Visual Studio, I am using a Makefile Project.

After creating the project, my first step is to delete the Win32 configuration. Since I am not interested in developing x86 applications. Other platforms could be added as required. 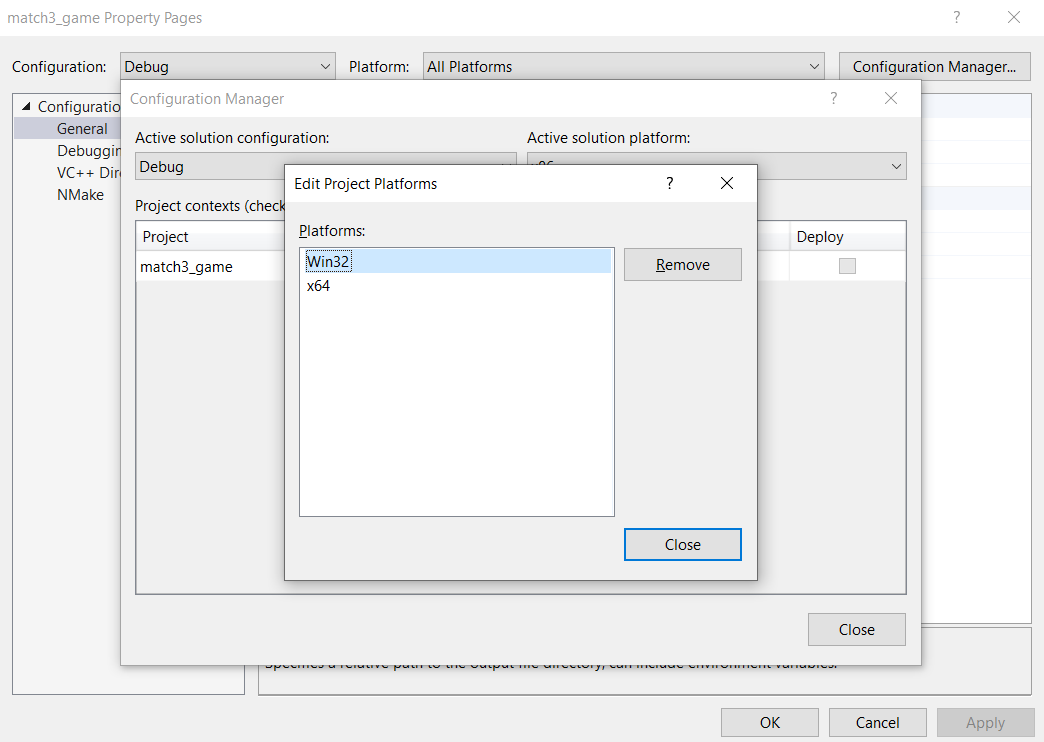 Next I create a few extra configurations: 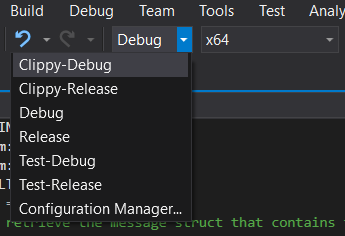 The names should be mostly self-explanatory what the purposes are

These configurations allow the common operation to be accessed right from within Visual Studio. Configuration management is mostly done with property sheets. 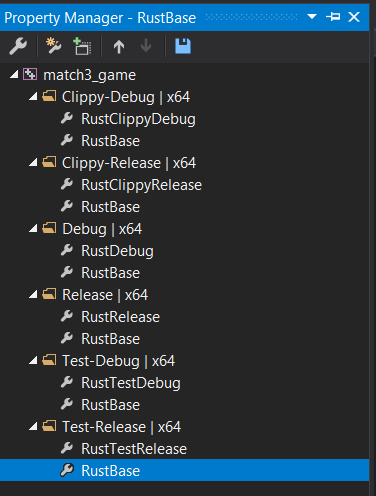 RustBase provides the default settings, such as OutputDirectory and IntermidiateDirectory. And the more specific property sheets provide the necessary Cargo commands to be executed via nmake.

With all the setup, I am now able to compile the game, debug the game using the Visual Studio debugger, run Clippy as well as Unit Tests.

Debugging Unit Tests is a bit more tricky because Cargo doesn’t generate deterministic file names for Unit Test executables. There is an open issue for it. It doesn’t seem to have gained much traction, though.

The solution that I am using is very primitive. When the Unit Tests are compiled, it will print the name of the generated executable. I then manually copy this name into the debug command. 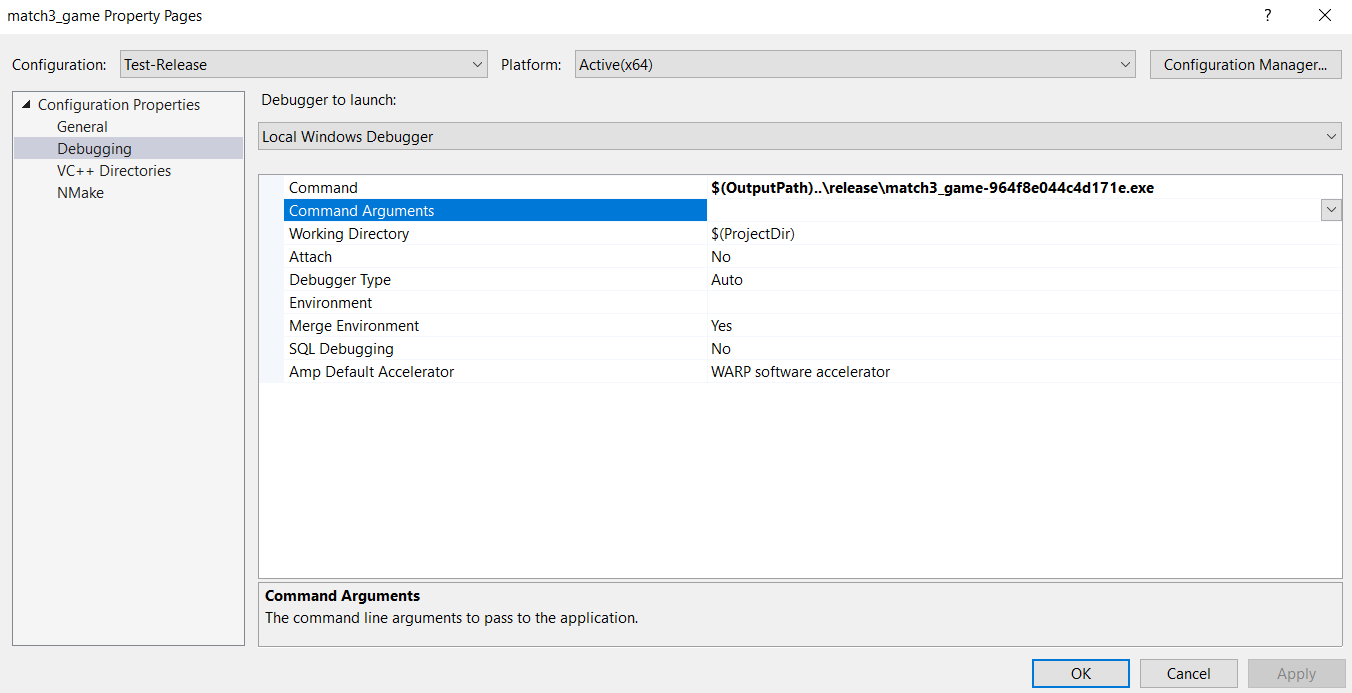 This name seems to be deterministic for the same version of Rust, but after a version update, the name changes, and I need to copy it again. Not a great solution, but it works.

If you know a better way, please let me know :)

Cargo formatting is a handy command to have easy access to. I suggest creating an External Tool in Visual Studio to enable one-click access to the tool.

The setup is shown below 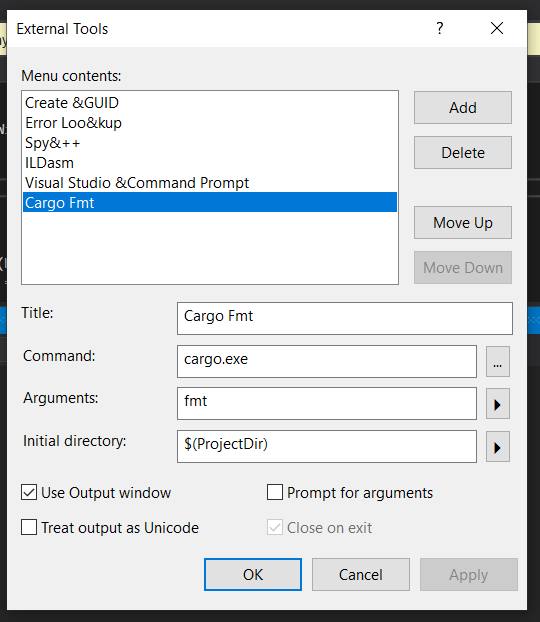 And with the external tool entry created, it is now accessible from the Tools category. With a single click, the source code will be formatted with the specified guidelines. 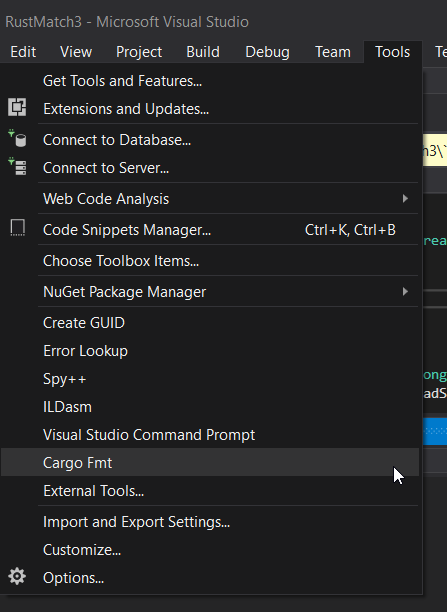 Rust panics will generally try to unwind the stack or abort the application execution. But when a debugger is attached, I generally want to halt the debugger at the point when a panic occurs to inspect the program state.

Rust provides the possibility to do this, but it’s not very well documented. The rust panic handler is internally always calling the unmangled function rust_panic, that also never gets inlined.

It is possible to set a function breakpoint on this function.

With this breakpoint set each time a panic occurs, you will get a breakpoint in the debugger.

The function is sadly only called with a deep call stack. We will need to go a few levels up the stack until you find the user code.

As you might notice in the previous screenshot, I have symbols as well as source code for the Rust implementation itself. When you hit the panic breakpoint from Visual Studio the first time, it will not be able to resolve symbols but instead, ask for the source code location. 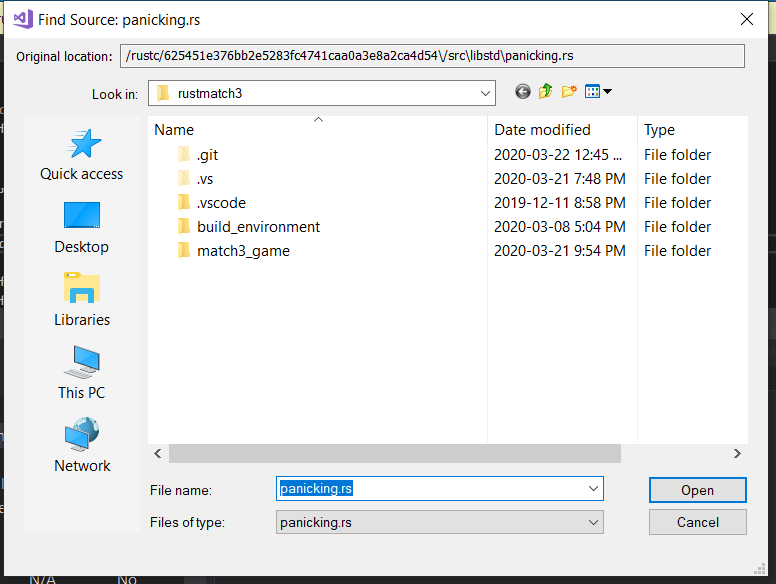 The Rust installations ships with full source code. It can be found in the rustup installation folder, for me it’s located in this location:

Pointing Visual Studio at the correct location will resolve the symbols and show you the Rust code for the position. It also will allow you to step through the Rust implementations. Really useful to learn about how Rust library functionality is internally implemented.

That’s it for today.

Next time I m going to improve the Rust code organization a little bit before continuing the programming of the game.

The code is available on GitHub