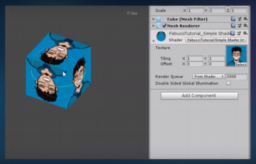 My take on shaders: Grass Shader (Part I)

[video] Deriving the SDF of a Box